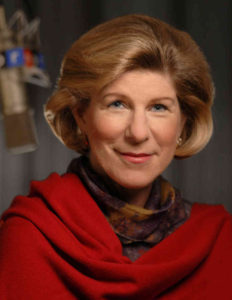 One of the country’s most respected journalists, Nina Totenberg is National Public Radio’s award-winning legal affairs correspondent. With more than 40 years’ experience at NPR, her reports are regularly featured on “All Things Considered,” “Morning Edition” and “Weekend Edition.”

Totenberg’s coverage of the Supreme Court and legal affairs has won her widespread recognition. As Newsweek stated: “The mainstays [of NPR] are ‘Morning Edition’ and ‘All Things Considered.’ But the crème de la crème is Nina Totenberg.”

Totenberg was the first radio journalist to be honored by the National Press Foundation as Broadcaster of the Year. She has been recognized seven times by the American Bar Association for excellence in legal reporting and won the first-ever Toni House award presented by the American Judicature Society for a career body of work.

In 1988, Totenberg won the Alfred I. duPont-Columbia University Silver Baton for her coverage of Supreme Court nominations. The jurors of the award stated, “Ms. Totenberg broke the story of Judge (Douglas) Ginsburg’s use of marijuana, raising issues of changing social values and credibility with careful perspective under deadline pressure.”

In 1991, her groundbreaking report about University of Oklahoma law professor Anita Hill’s allegations of sexual harassment by Judge Clarence Thomas led the Senate Judiciary Committee to re-open Thomas’ Supreme Court confirmation hearings to consider Hill’s charges. NPR received the prestigious George Foster Peabody Award for its gavel-to-gavel coverage—anchored by Totenberg—of both the original hearings and the inquiry into Hill’s allegations, and for Totenberg’s reports and exclusive interview with Hill.

That same coverage earned Totenberg additional awards, including the Long Island University George Polk Award for excellence in journalism; the Sigma Delta Chi Award from the Society of Professional Journalists for investigative reporting; the Carr Van Anda Award from the Scripps School of Journalism; and the prestigious Joan S. Barone Award for excellence in Washington-based national affairs/public policy reporting, which also acknowledged her coverage of Justice Thurgood Marshall’s retirement.

A frequent contributor to major newspapers and periodicals, she has published articles in The New York Times Magazine, The Harvard Law Review, The Christian Science Monitor, Parade Magazine and New York Magazine.

Before joining NPR in 1975, Totenberg served as Washington editor of New Times Magazine. Prior to that, she was the legal affairs correspondent for the National Observer.