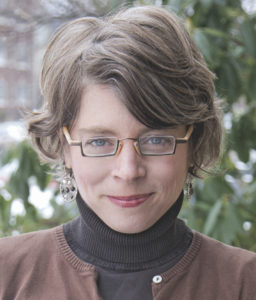 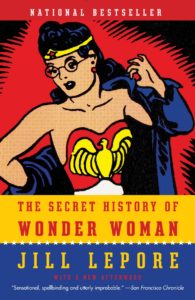 Lepore is the David Woods Kemper ’41 Professor of American History at Harvard University and a staff writer at the New Yorker. Among her publications is the New York Times Best Seller “The Secret History of Wonder Woman” (Knopf, 2014), winner of the 2015 American History Book Prize. Her most recent book is “Joe Gould’s Teeth” (Knopf, 2016). She is currently writing a history of the United States.

Lepore has been contributing to The New Yorker since 2005, writing about American history, law, literature and politics. Three of her books derive from her New Yorker essays: “The Mansion of Happiness: A History of Life and Death” (Knopf, 2012), a finalist for the Carnegie Medal for Excellence in Nonfiction; “The Story of America: Essays on Origins” (Princeton, 2012), shortlisted for the PEN Literary Award for the Art of the Essay; and “The Whites of Their Eyes: The Tea Party’s Revolution and the Battle for American History” (Princeton, 2010), a Times Book Review Editors’ Choice.

Her earlier work includes a trilogy of books that together constitute a political history of early America: “The Name of War: King Philip’s War and the Origins of American Identity” (Knopf, 1998), winner of the Bancroft Prize, the Ralph Waldo Emerson Award and the Berkshire Prize; “New York Burning: Liberty, Slavery and Conspiracy in Eighteenth-Century Manhattan” (Knopf, 2005), winner of the Anisfield-Wolf Award for the best nonfiction book on race and a finalist for the Pulitzer Prize; and “Book of Ages: The Life and Opinions of Jane Franklin” (Knopf, 2013), TIME’s Best Nonfiction Book of the Year, winner of the Mark Lynton History Prize and a finalist for the 2013 National Book Award for Nonfiction.

In addition to The New Yorker, Lepore’s essays and reviews have appeared in The New York Times, the Times Literary Supplement, the Journal of American History, Foreign Affairs, the Yale Law Journal, American Scholar and the American Quarterly. They have been translated into Chinese, French, German, Italian, Japanese, Latvian, Portuguese, Spanish and Swedish, and have also been widely anthologized, including in collections of the best legal writing and the best technology writing.

Lepore joined Harvard’s history department in 2003 and was chair of the history and literature program in 2005-10, 2012 and 2014. In 2012, she was named Harvard College Professor, a recognition of distinction in undergraduate teaching. Since 2015, she has been an affiliated faculty member at the Harvard Law School. Much of Lepore’s scholarship explores absences and asymmetries of evidence in the historical record, with a particular emphasis on the histories and technologies of evidence and of privacy. A prize-winning professor, she teaches classes in evidence, historical methods, the humanities and American political history.

In 2014, Lepore was elected to the American Academy of Arts and Sciences and to the American Philosophical Society. She is a past president of the Society of American Historians and a former commissioner of the Smithsonian’s National Portrait Gallery.

Lepore’s visit is sponsored in cooperation with the Maxwell School of Citizenship and Public Affairs.