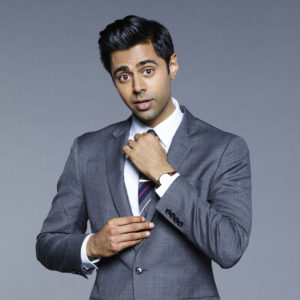 Hasan Minhaj is a comedian, actor, host, and writer. In November 2014, he made his debut as a full time correspondent on the Emmy and Peabody award-winning THE DAILY SHOW (and became the last hire Jon Stewart made). His many incredible pieces can be found here: http://www.cc.com/topics/ia1uso/hasan-minhaj

In 2014, he was invited to be a part of the Sundance Institute’s prestigious New Frontier Story Lab where he developed his solo show HOMECOMING KING. The show then debuted off-Broadway at the Cherry Lane Theatre in Winter 2015 to critical acclaim, and is currently touring nationally. HASAN MINHAJ: HOMECOMING KING is now streaming as a comedy special on Netflix, with Rick Famuyiwa attached as EP. The special has been received with rave reviews. Recently, Hasan had the prestigious honor of hosting the annual White House Correspondents Dinner in Washington DC on April 29.

Hasan is the host of the docu-series STAND UP PLANET, which was financed by the Bill and Melinda Gates Foundation. The documentary aired on PBS, Pivot, KCET and LinkTV. The series, which was filmed in South Africa, India and the US, highlights economic problems throughout the world through the lens of standup comedians. Hasan was the keynote speaker at the 2013 Social Good Summit in New York City, speaking alongside other notable figures such as Al Gore, JJ Abrams, and Will.I.Am, and had the honor of being chosen as a “New Face” at the 2014 Just for Laughs Festival in Montreal.

Hasan recently filmed the feature films ROUGH NIGHT for Sony, alongside Scarlett Johansson and Kate McKinnon, and MOST LIKELY TO MURDER for Lionsgate Digital, opposite Rachel Bloom and Adam Pally. He was featured on Comedy Central’s hit show @Midnight, was profiled on LAST CALL WITH CARSON DALY (pass: lastcall10), and other TV credits include HBO’s GETTING ON, ARRESTED DEVELOPMENT for Netflix, and CHELSEA. He regularly performs standup and participates in storytelling shows (like the Moth) around the country. His viral web series ‘The Truth with Hasan Minhaj’has been featured in countless publications including The Huffington Post, and the New York Times.