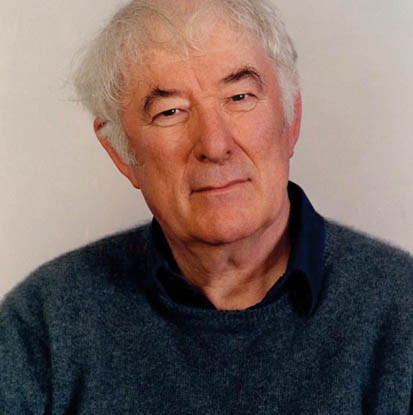 Seamus Heaney, winner of the Nobel Prize in Literature in 1995, has been called the most important Irish poet since William Butler Yeats.

His writing career began at Queen’s University in Belfast, where he published work in the university magazines under the pseudonym Incertus.He published Eleven Poems in 1965 in connection with the Belfast Festival. His award-winning works include the Death of a Naturalist (1966), Door into the Dark (1969), Wintering Out (1972) and North (1975), Field Work (1979), Selected Poems and Preoccupations: Selected Prose (1981), Station Island (1984), The Haw Lantern (1987), Seeing Things (1991); The Redress of Poetry (1995, a collection of lectures he delivered at Oxford); and The Spirit Level (1996).

Heaney co-founded Field Day Publishing in 1983. He taught and served as a department head at Carysfort College in Dublin, and was, at various stages in his career, a visiting professor, Boylston Professor of Rhetoric and Oratory, and the Ralph Waldo Emerson Writer-In-Residence at Harvard University. He was Professor of Poetry at Oxford University from 1989-94.

Heaney’s most recent publications include a translation of Beowulf (2000), Diary of One Who Vanished (2000), Opened Ground (1998) and Electric Light (2001) and Finders Keepers: Selected Prose 1971-2001, a collection of essays. His newest collection of poetry, District and Circle, was published in 2006. This year, Farrar, Straus and Giroux published Stepping Stones: Interviews with Seamus Heaney by Dennis O’Driscoll.