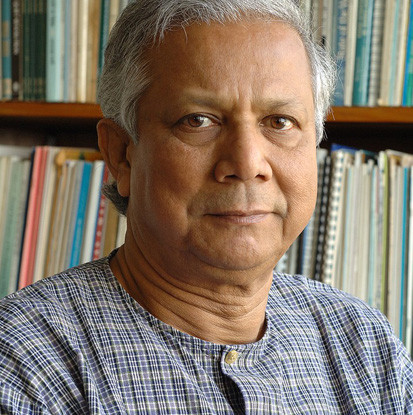 Creating a World Without Poverty

Muhammad Yunus has worked for nearly four decades to eradicate poverty through micro-lending. His personal loans of small amounts of money to destitute basket weavers in Bangladesh in the mid-1970s planted the seeds for the Grameen Bank Project, which was then established in 1983. The objective of the Grameen Bank is to help poor people escape from poverty by providing loans without collateral to support income-generating activities. The Grameen Bank has advanced to the forefront of a burgeoning world movement toward eradicating poverty through micro-lending. The bank now has eight million borrowers, 97 percent of whom are women, and has lent more than $8.26 billion with a nearly 100 percent repayment rate. Yunus is the recipient of the World Food Prize (1994) and the Sydney Peace Prize (1998) and in 2006, he received the Seoul Peace Prize and the Nobel Peace Prize. This August, Yunus was awarded the Presidential Medal of Freedom by President Barack Obama. Yunus was professor of economics and director of the Rural Economics Program at Chittagong University in Bangladesh from 1975-89. He is the author of “Banker to the Poor” (PublicAffairs, 2003) and “Creating a World Without Poverty” (PublicAffairs, 2008).