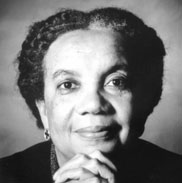 A Voice for Children

Edelman has been an advocate for disadvantaged Americans for her entire professional life. Under her leadership, CDF has become the nation’s strongest voice for children and families. The Leave No Child Behind® mission of the Children’s Defense Fund is to ensure every child a Healthy Start, a Head Start, a Fair Start, a Safe Start, and a Moral Start in life and successful passage to adulthood with the help of caring families and communities. Edelman began her career in the mid-‘60s when, as the first black woman admitted to the Mississippi Bar, she directed the NAACP Legal Defense and Educational Fund office in Jackson, Miss. She served as counsel for the Poor People’s Campaign in Washington, D.C., founded the Washington Research Project, and served as the director of the Center for Law and Education at Harvard University for two years. Her work has earned her numerous awards, including the Presidential Medal of Freedom. A prolific author, her latest book, The Sea is So Wide and My Boat is So Small: Charting a Course for the Next Generation, was released last fall.