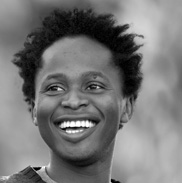 The Making, and Unmaking, of a Boy Soldier

Ishmael Beah’s childhood effectively ended at age 12, when he fled attacking rebels in his war-torn homeland of Sierra Leone. Within a year, he was forced into service as a child soldier for the government army, where he found himself capable of performing truly horrific acts.  After being relocated to a UNICEF rehabilitation center at age 16, Beah was finally able to begin to heal and gain his life—and his humanity—back. His gripping memoir, “A Long Way Gone: Memoirs of a Boy Soldier” (Farrar, Straus and Giroux, 2007) is SU’s Shared Reading Program selection for 2008.