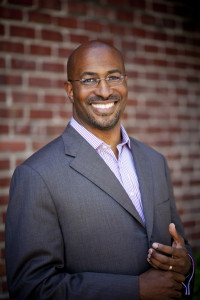 Recently named a co-host to CNN’s Crossfire reboot, Van Jones is president and co-founder of Rebuild the Dream, a platform for bottom-up, people-powered innovations to help fix the U.S. economy. A Yale-educated attorney, Jones has written two New York Times Best Sellers: “The Green Collar Economy,” the definitive book on green jobs, and “Rebuild the Dream,” a roadmap for progressives in 2012 and beyond. In 2009, Jones worked as the green jobs advisor to the Obama White House. There, he helped run the inter-agency process that oversaw $80 billion in green energy recovery spending.

Jones is the founder of Green For All, a national organization working to get green jobs to disadvantaged communities. He was the main advocate for the Green Jobs Act, signed into law by President George W. Bush in 2007, the first piece of federal legislation to codify the term “green jobs.” Under the Obama administration, the Green Jobs Act has resulted in $500 million for green job training nationally. Jones had also worked in social justice for nearly two decades and is the co-founder of two social justice organizations—the Ella Baker Center for Human Rights and Color of Change.