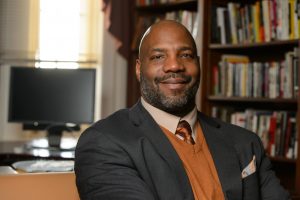 Co-sponsored in association with the College of Arts & Sciences and Maxwell School of Citizenship and Public Affairs.

Jelani Cobb is the author of Substance of Hope: Barack Obama and the Paradox of Progress, and To the Break of Dawn: A Freestyle on the Hip Hop Aesthetic, among others. As a long-time staff writer at The New Yorker, Cobb wrote a remarkable series of articles about race, injustice, and the police; for which he received the Sidney Hillman Prize for Opinion & Analysis Journalism. He also teaches at the Columbia University Graduate School of Journalism. There, he recently accepted a duPont-Columbia Award on behalf of filmmaker Ava Duvernay’s Oscar-nominated documentary 13th –in which he was prominently featured as an expert on the ‘mythology of black criminality’. Formerly the director of the Africana Studies Institute at the University of Connecticut, Jelani is also the recipient of the Walter Bernstein Award from the Writer’s Guild of America for his investigative series Policing the Police, which aired on PBS Frontline.