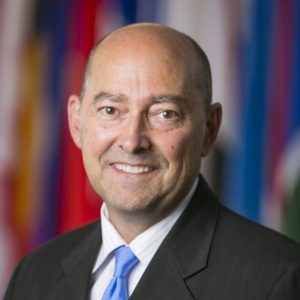 Co-sponsored in association with the D’Aniello Speaker Series and media sponsor WAER.

Retired United States Navy admiral, currently an Operating Executive with The Carlyle Group[3] and Chair of the Board of Counselors at McLarty Associates.[4] In August 2018, he stepped down[5] as the dean of the Fletcher School of Law and Diplomacy at Tufts University, a graduate school for international affairs.[6] Stavridis serves as the chief international diplomacy and national security analyst for NBC News in New York.[7] He is also chairman of the board of the U.S. Naval Institute [8][9] and a Senior Fellow at the Johns Hopkins University Applied Physics Laboratory.[10]

In June 2018, when Tufts announced that Stavridis would be stepping down as Fletcher Dean, Tuft’s president and provost lauded him in a joint statement[11] calling him a “dynamic leader, a wonderful partner, and a prolific scholar.”

Stavridis graduated from the U.S. Naval Academy in 1976. While in the Navy, Stavridis served as the commander, U.S. Southern Command (2006 to 2009) and commander, U.S. European Command and NATO Supreme Allied Commander Europe (2009 to 2013),[12][13] the first Navy officer to have held these positions. Stavridis earned a Ph.D and Master of Arts in Law and Diplomacy from The Fletcher School of Law and Diplomacy at Tufts University in 1984, where he won the Gullion Prize.

Stavridis retired from the Navy in 2013 after thirty-seven years of service and became dean of The Fletcher School in the summer 2013. His book The Accidental Admiral, describing his time in the Navy, was published in October 2014. His book The Leader’s Bookshelf, published in 2017, describing the top 50 books that inspire better leadership was a #1 best seller in Amazon’s “Literary Bibliography and Indexes” category.[14] A second book published in 2017 is called Sea Power: The History and Geopolitics of the World’s Oceans.[15] It opened at #9 on the Washington Post non-fiction bestseller list.[16] He is an associate fellow of the Geneva Center for Security Policy and a member of the Inter-American Dialogue.[17][18]
He was considered as a potential vice-presidential running mate by the Hillary Clinton campaign in 2016 and as a possible U.S. Secretary of State by President-elect Donald Trump in the fall of 2016.[19][20]